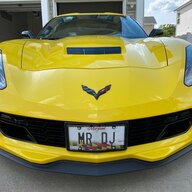 GM is ramping up its all-electric vehicle efforts with the introduction of new EV variants for the popular Chevy Silverado and GMC Sierra pickups, both of which promise all the traditional capability and utility expected of the nameplates, plus cutting-edge technology and powertrains. Both models present all-new exterior designs that emphasize their electron-powered status. The question now is which design looks better – the Chevy Silverado EV, or the GMC Sierra EV?

Critically, both the Chevy Silverado EV and the GMC Sierra electric pickup ride on the same narrow-track variant of the GM BT1 platform, GM’s EV-centric architecture for utility models. Both pickups are also similar in terms of features and dimensions. As such, it’s really the exterior design that sets these two vehicles apart.

Let’s start up front, where we find some pretty dramatic styling differences between the Chevy Silverado EV and GMC Sierra electric pickup. The Silverado EV, for example, incorporates a thin upper lighting signature between the hood and fascia, with the Chevy badge mounted high. The primary forward lighting is lower in the corners, while a small air intake is lower towards the bumper. Meanwhile, the GMC Sierra EV incorporates L-shaped lighting signatures in the corners of the fascia, with additional styling lines in the nose that more clearly define the blocked-off front grille section. Like the Silverado EV, the Sierra electric pickup incorporates a slim lower air intake, but the latter gets vertical slats as compared to the honeycomb insert of the former. The Sierra electric pickup also places the primary forward lighting lower in the fascia, as well as “sideburn” styling elements.

Moving over to the sides, we find that both models offer four doors for ingress and egress. The rear sail panel treatment on the Chevy Silverado EV, however, incorporates a “floating roof” design, while we also see a good amount of black cladding around the lower edges of the vehicle. By comparison, the GMC Sierra EV has more painted metal in its design. The Sierra electric pickup also has a deep profile styling indent that runs towards the rear of the vehicle from the front doors, while the Chevy Silverado EV has a thinner, straight lower styling line.

Finally, the rear end of the Chevy Silverado EV has a smoother, straighter break in the tailgate for the Chevy Multi-Flex feature, whereas the break in the GMC Sierra EV tailgate incorporates a “tabbed” sections around the outer sections of the GMC MultiPro feature. The taillight graphics are also different, with a more angular design for the Silverado and a smoother design for the Sierra.

All told, there are some considerable styling differences between these two pickups. But we want to know – which exterior design do you prefer? Tell us by voting in the poll below, and remember to subscribe to GM Authority for more Chevy Silverado news, GMC Sierra news, Chevy news, GMC news, GM electric vehicle news, and around-the-clock GM news coverage. 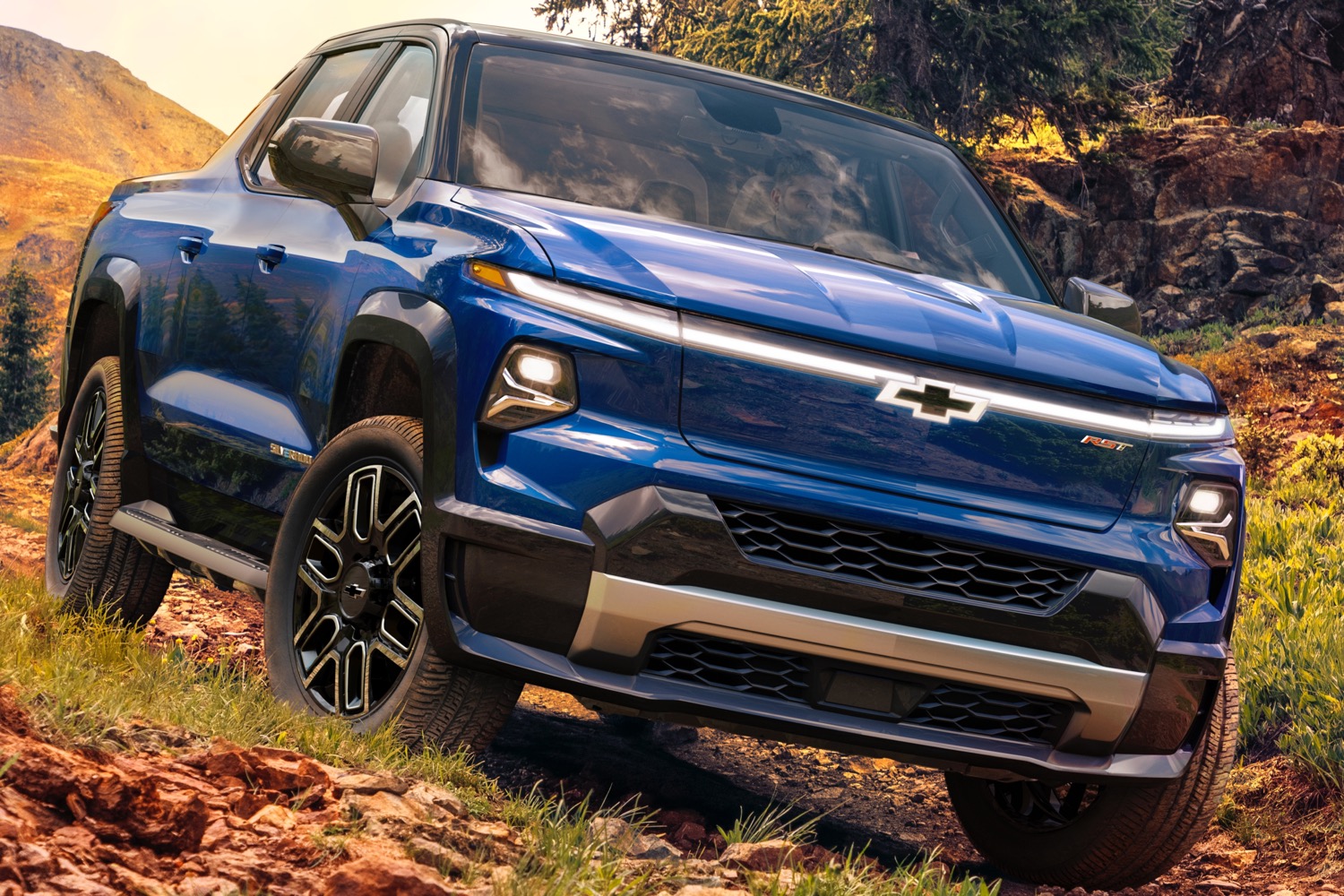 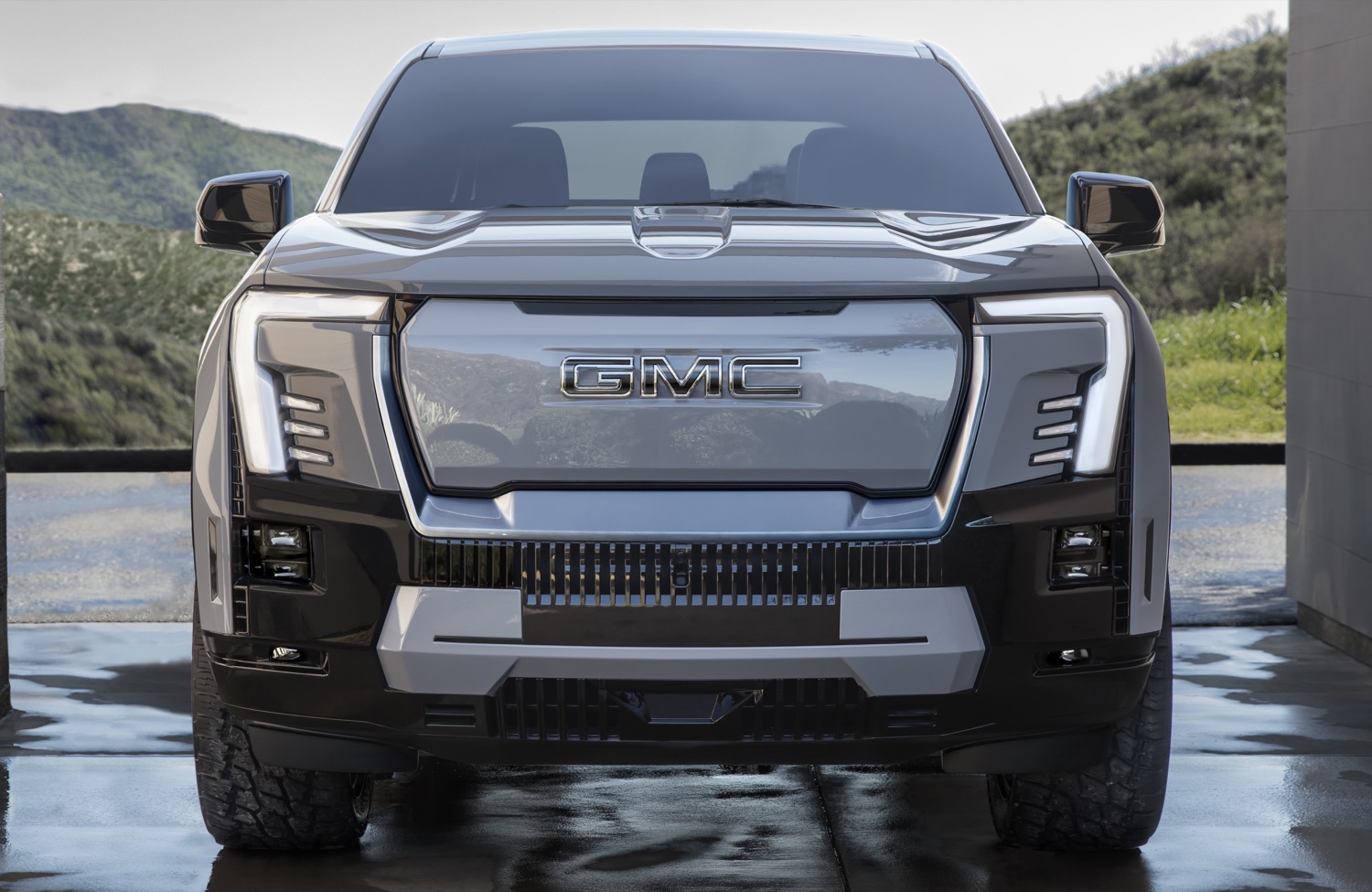 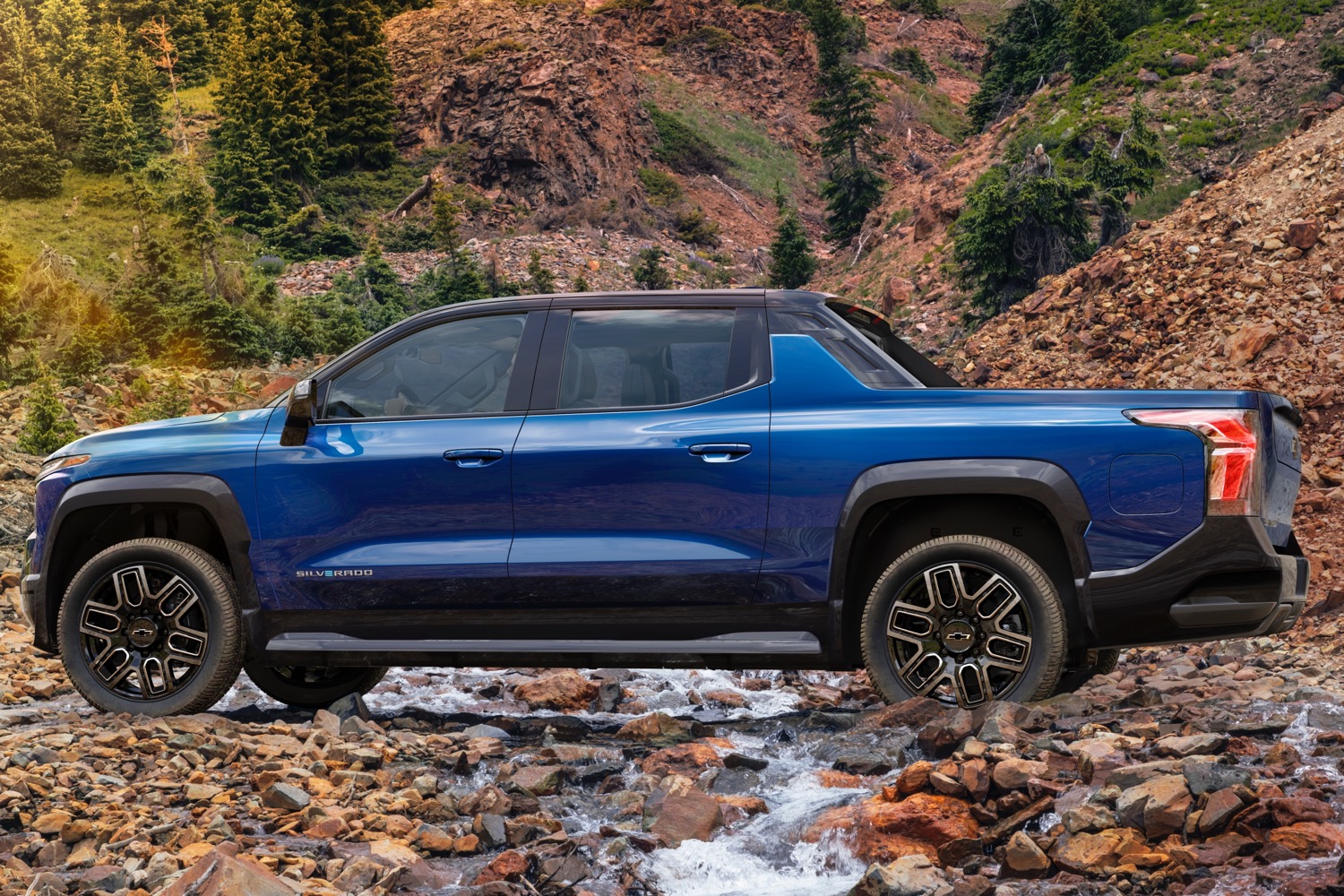 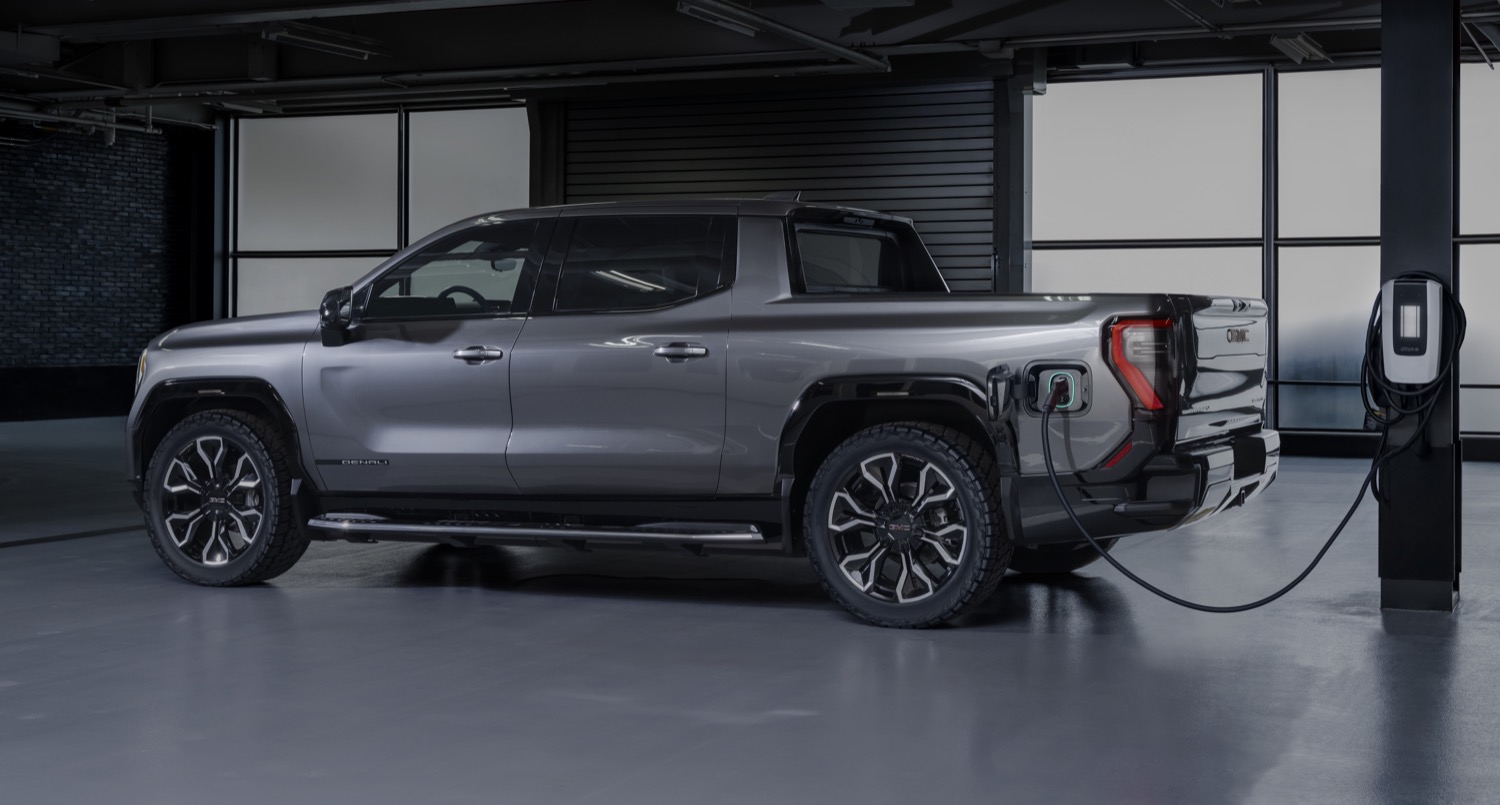 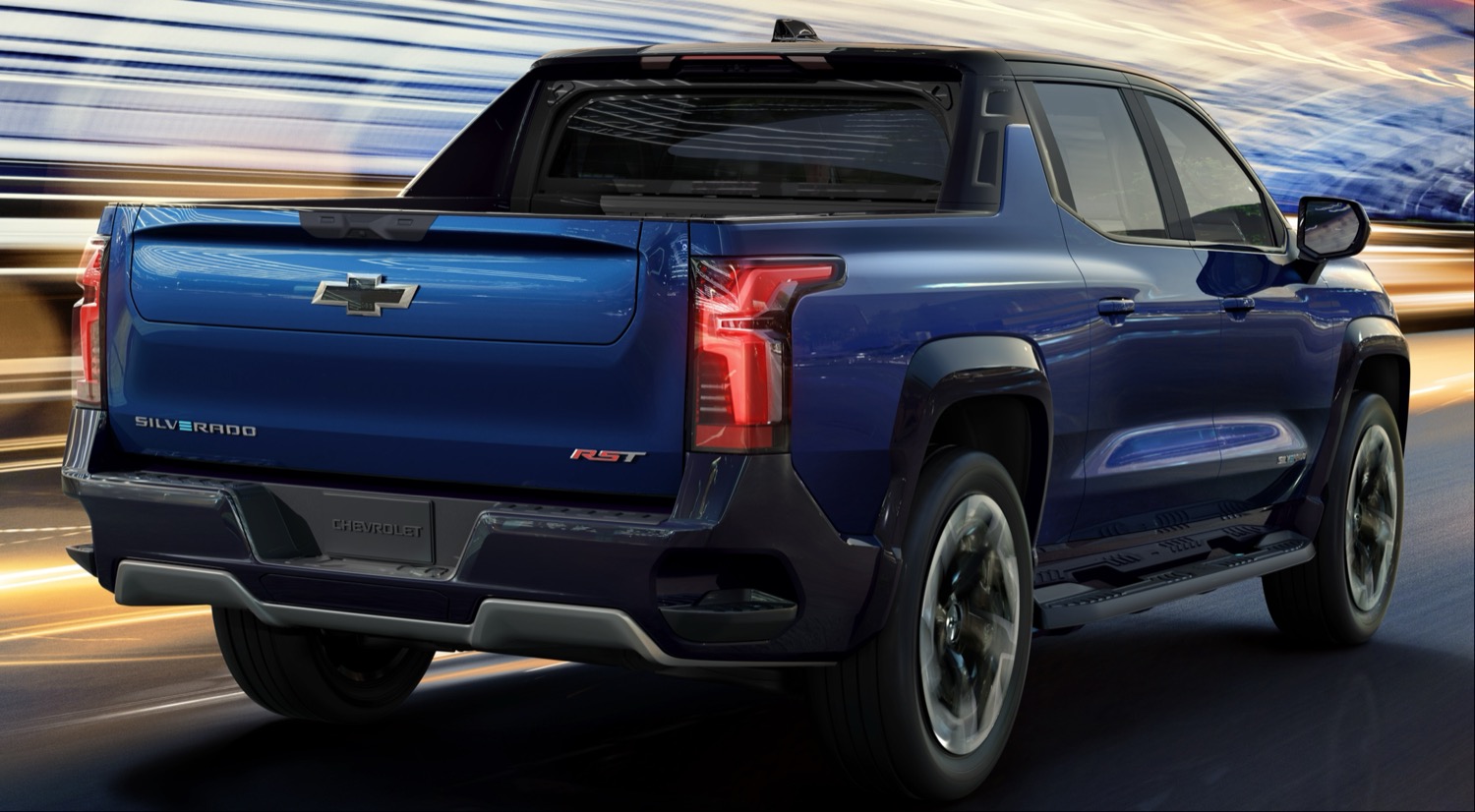 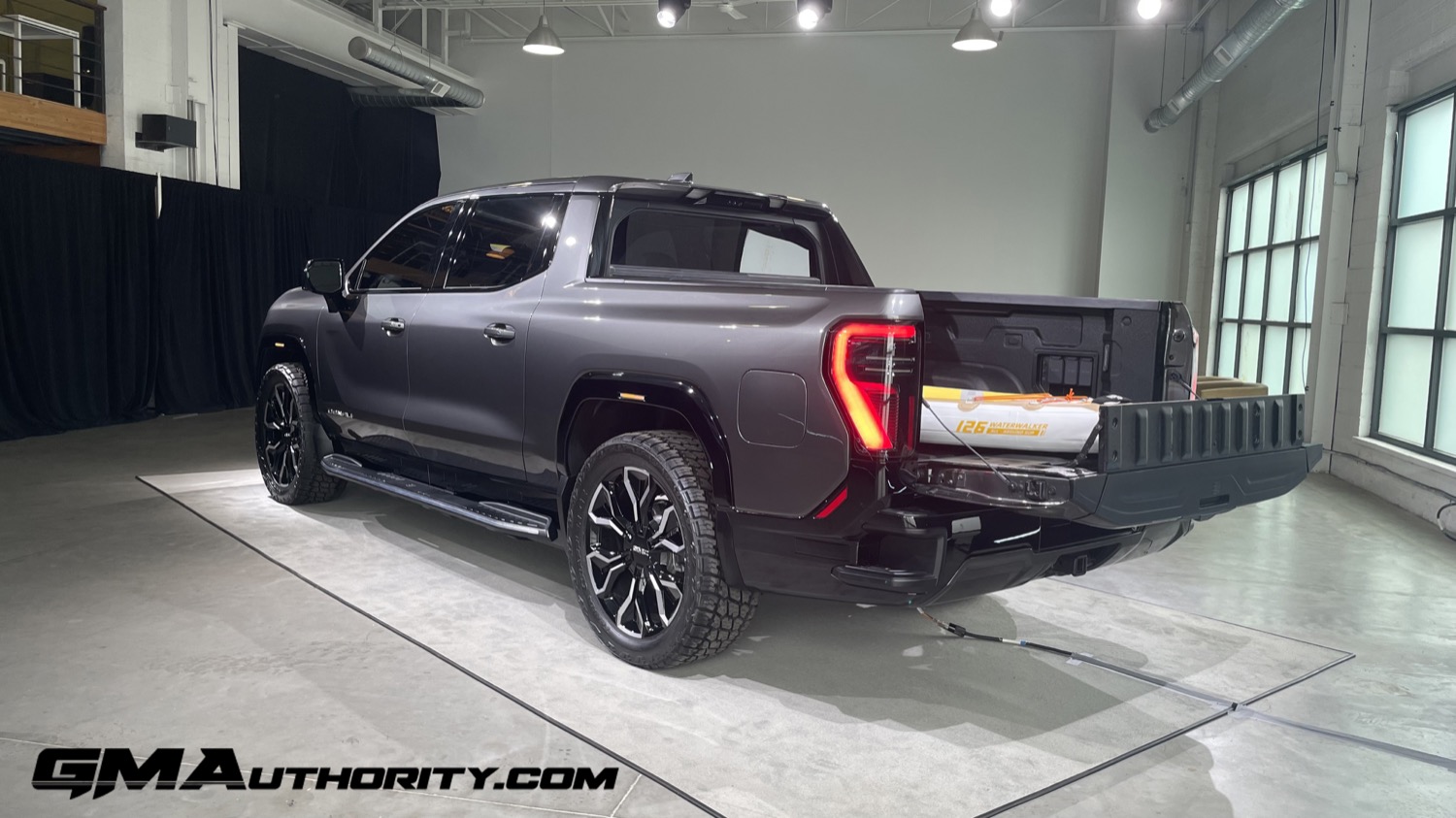 Yeah, I agree, GMCs have been pretty decent looking and big time luxury on the inside...
OP
OP

I think both look pretty good in their own way. The Rivian would be perfect if they didn’t put in those goofy headlights up front. And don’t get me started on the crazy looks of the Cybertruck. I’m glad GM made their EV trucks look very much like regular pickups and didn’t try to do something really weird.
2018 Buick TourX Essence - Sport Red
2013 Chevy Volt Premium - White Diamond Tricoat
2004 Cadillac CTS - 5 speed manual tranny
1995 Chevy C2500 Suburban
R:IQ 2.2M, at 3.3M

I like the side view of the GMC better. I don't like the Chevy roof "sails". But I think the front of the GMC is too busy. There is too much going on. I like the Chevy front better. The Salt Lake auto show is coming up next week. I'm hoping to see a Silverado EV there. It might have a whole different look when seeing it in real life. It seems all the photos and videos are of one single truck.
Last edited: Jan 7, 2023

I'm hoping Cadillac takes this and makes an Escalade EXT out of it. I missed the GMC reservations as they were sold out, but I'll get one in and decide depending on which reservation arrives first.
2018 Buick TourX Essence - Sport Red
2013 Chevy Volt Premium - White Diamond Tricoat
2004 Cadillac CTS - 5 speed manual tranny
1995 Chevy C2500 Suburban
R:IQ 2.2M, at 3.3M

The only thing I don't like is that little sail like thing above the bed on the Chevy. Otherwise, I have always like the lines on the Chevy and nose on this model especially. The GMC looks like a 'uh we don't need a grill so we'll make this anyway' vs just a nose on the chevy. Not a fan of the GMC giant line of a headlight, is too jarring to my brain. That's just me though, not bashing the car just stating my preference.

I'd always reserve judgement to see them in person, I've found that cars these days don't photograph as well and look better in person sometimes.

Personally I've yet to figure out why GM does the GMC and Chevy lines when they almost 100% mirror each other (no hummer) would just think it'd be better for their brand and revenue to combine the lines and just have Denali versions or something.
OP
OP

My wife and I saw the Silverado in person last week at the DC Auto Show; that puppy is gorgeous as is the Blazer and even the Equinox but my wife likes the simpler dash lines in the Denali. See the 3 here:

Mr DJ said:
My wife and I saw the Silverado in person last week at the DC Auto Show; that puppy is gorgeous as is the Blazer and even the Equinox but my wife likes the simpler dash lines in the Denali. See the 3 here:
Click to expand...

I know but what am I to do

I just revisited the Denali EV site and way at the bottom, they quietly announced the AT4 and Evolution editions. I now want an AT4. Alas, if RAM delivers half the features of the RAM Revolution concept truck, I may switch from a lifelong GM fan to Mopar… that Charger Daytona EV also looks nice.
2018 Buick TourX Essence - Sport Red
2013 Chevy Volt Premium - White Diamond Tricoat
2004 Cadillac CTS - 5 speed manual tranny
1995 Chevy C2500 Suburban
R:IQ 2.2M, at 3.3M
OP
OP

Why? They both have less features than the Denali...

Mr DJ said:
Why? They both have less features than the Denali...
Click to expand...